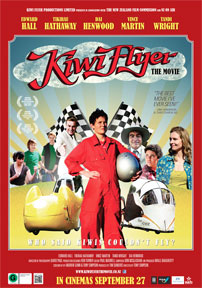 New Zealand children’s film Kiwi Flyer has won the Audience Award at the Schlingel – 18th International Film Festival for Children and Young Audience held in in Chemnitz, Germany. Tony Simpson, director film shot largely in Nelson, said the award was voted by all the children who attended the festival during the week. “It was great to hear the German audiences laugh and giggle at all the same jokes as Kiwi kids,” Simpson said. The film is about a young boy who sets out to win the local trolley derby in memory of his father. The film stars Vince Martin, Dai Henwood, Tandi Wright and Auckland youngsters Edward Hall and Tikirau Hathaway.