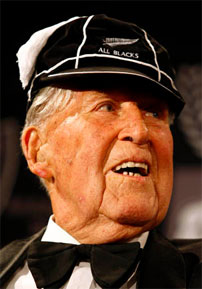 Rugby legend Fred “The Needle” Allen – who at age 92 was the oldest living All Black and one of the rare group of players to have both played in and coached the national team – has died in Orewa. A fly-half, he played 21 matches for the All Blacks between 1946 and 1949 and captained the side in all of them – but it was as a coach he made a major impression. Allen coached the All Blacks from 1966 until 1968 during one of the team’s greatest eras, when all 14 Tests matches played were won. He was knighted in 2010 and was inducted into the New Zealand and International Rugby Halls of Fame. Author and close friend Les Watkins – who co-wrote last year’s top-selling book, Fred The Needle: The Untold Story of Sir Fred Allen remembered his mate as “one of the greatest gentlemen in the business”. “He is one of the finest, most-inspiring men I have ever come across,” Watkins said. New Zealand Rugby Union chairman Mike Eagle paid tribute to the former coach saying: “His unfailing dedication to rugby and his continuing contribution to the game, well after his own playing and coaching days, secures his place in our history books as one of the great legends of the game.”