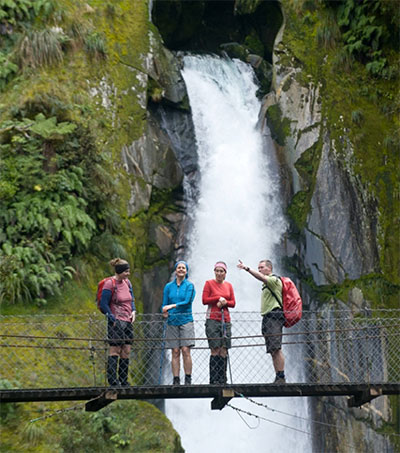 “One of the Fiordland Great Walks, the Milford Track, is a world-famous four-day route. Hiking it requires planning as much as a year in advance if you’re planning on visiting during peak Great Walks season, from 27 October until 27 April.

“The crystal-clear waters along the Milford Track make it relatively easy to spot the freshwater longfin eel, featured on an episode of Animal Planet’s River Monsters. Elsewhere, watch out for backpack-eating alpine parrots called keas. They are ever-present in high-altitude regions and they’re not afraid to peck at human gear in search of food.

“On Stewart Island, you’ll find another Great Walk, the Rakiura Track. Rakiura’s 32km loop has huts as well as campsites.

“Stewart Island is popular with wildlife watchers hoping to glimpse kiwis. They’re nocturnal and can be hard to see in the wild. A number of guided kiwi-spotting tours are offered on the island.”