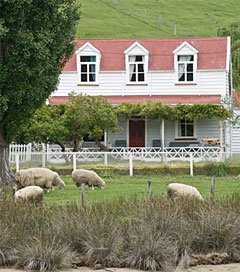 For the Times We Live in, NZ the Best Country to Be

New Zealand “is absolutely the best country in the world for the times we’re living in”, according to former Seattleite, speculator and business consultant Chris Eyerman.

When Eyerman, his wife Kelly, and their young twins moved from the Emerald City to Motueka, a town of about 7000 people, they joined a tiny exodus. Thousands of Americans move to New Zealand every year, but more move the other way.

Motueka, with no traffic lights or high-rises, looks like a lot of rural towns in New Zealand. The surrounding areas are dotted with boutique wineries, olive groves, and pottery studios. Eyerman and Kelly say it reminds them of a tropical Napa, if Napa were still a small town. If you want to join Eyerman on a mountaintop or sailing on the Tasman Sea, you’d better do it soon. The greenback is stronger than the New Zealand dollar, but may not stay that way for long if trends hold.

The simplicity of life in New Zealand is sometimes overwhelmingly affecting. “Even the mail carriers riding their bikes almost made me cry,” Kelly says.