NZEDGE  >  News  >  Society  >  Through Yellowstone and on to Key West 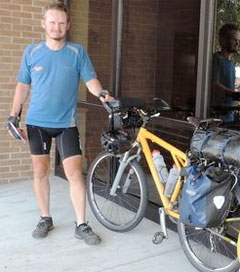 Through Yellowstone and on to Key West

Alabama is the latest stop for New Zealand engineer Wayne Gatenby, who is biking across America on a journey taking him to Key West.

Gatenby turns 40 this year, and his particular bucket list included a cross-continental trip to see the United States through its landmarks and small towns. His journey began on 1 July across the border in Vancouver.

As he pedalled through East Alabama, he passed the 3500 mile mark. His journey has taken him through the North Cascades, Yellowstone National Park, over the Mississippi, and other points, with a detour to Mount Rushmore.

“It’s an adventure,” Gatenby said. “I had been to America several times, but those were trips on buses, so you didn’t get to see much except the Interstate. Now I’m going through the centre of the US, and you see a lot of small towns with only a few hundred people. That lets me get friendly.”