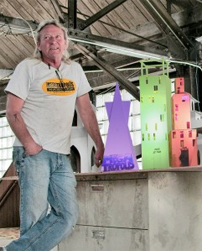 New Zealand builder Chris “Kiwi” Hankins is putting his skills to use in Reno, leading the construction of the Temple of Transition – the latest super-sized art project for Burning Man 211. Built entirely out of plywood, the temple will consist of six structures – five 58-foot-high outer temples encircling a 12-foot-high inner temple. Built entirely in Reno, the completed installation will be transported by truck to Black Rock City where it will be burned as part of the annual Burning Man festival. Kiwi is no stranger to large projects, having previously led projects for Kiwiburn (New Zealand’s version of Burning Man), and most recently built Megatropolis alongside the International Arts Megacrew in 21. “Before we were even finished building Megatropolis, I was already thinking ‘what are we gonna build next,” says Kiwi. As Megatropolis burned, Kiwi told a friend he wanted to do a temple as his next build. The project is currently on track, with around 6 percent of the temple already completed – a figure that equates to over 1, sheets of plywood. Not only is Kiwi leading the build of the temple, but he’s helping drive to raise the remaining $27, required to complete the project.