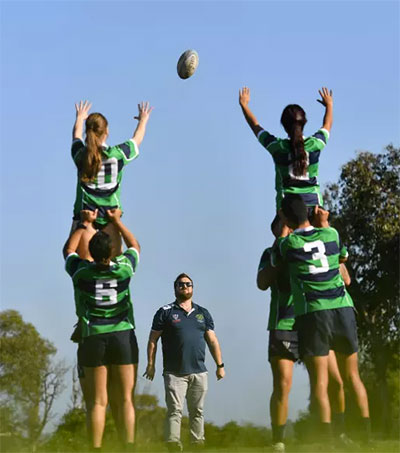 Fountain Gate Secondary College in Melbourne, Australia never thought it would be putting up rugby posts, at least not until New Zealand-born teacher Jimmy Orange came along.

Orange went through a school system where rugby and school are bound closely together and as he went through his opening weeks as a science teacher at Fountain Gate he sensed it could work at his new school.

Within four years Fountain Gate’s rugby academy is now its pride and joy and the sport has become the link between many of their most disengaged students and getting an education.

In New Zealand, rugby is the nation’s game and the heart of almost every school’s sporting programme, it’s so popular schools field multiple teams and for the most part playing the game at school is free.

At his new school, Orange realised the potential.

While he wasn’t planning to produce future internationals, he did see a way for rugby to possibly turn some wayward kids towards tertiary education or the sports industry.

“There wasn’t a model to run it off, there was just an idea that this could be engaging,” Orange recalled.

So he designed a programme which could fit into the school’s schedule and after solving all the logistical problems was able to start up the academy.

There is a selection process where students apply and interview for a place. Those who made it had to keep attending class and getting good marks.

The academy has grown each year and now includes “pre-academy” groups in year seven and eight plus academy groups in years 9-12. There are around 100 students in the programme and the split between boys and girls is almost 50-50.

“We had school refusers who didn’t want to come to school, then we offered them places in the academy and all of a sudden they started turning up to school in their uniform ready to go,” Orange said. “The retention, especially the Polynesian kids, is massive and there are so many more floating around in year 12 than there used to be.”