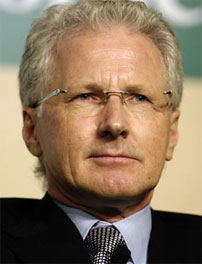 New Zealand-born businessman Richard Chandler will inject $194 million into Tasmanian-based timber company Gunns. The investment is likely to wipe out a significant portion of the company’s debt, positioning it to build the $2.3 billion Tamar Valley pulp mill. Chandler was formerly CEO of the Sovereign group of companies, in partnership with his brother, Christopher Chandler. The brothers split their assets in 2007 with Richard Chandler creating Orient Global. Chandler is also the founder of Freedom to Create and the Freedom to Create Prize, an international award that celebrates the power of the arts to promote social justice and inspire the human spirit. Chandler is a resident of Singapore.