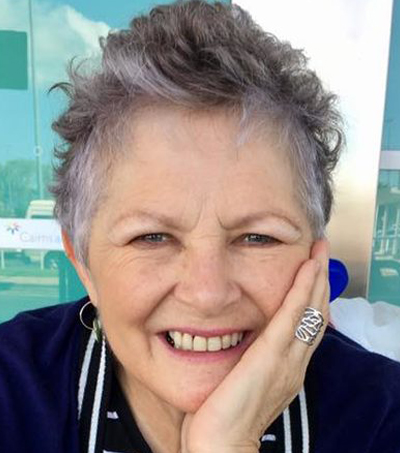 Sue Paterson, the most impactful New Zealand arts producer of this generation, has died in Wellington aged 65 from cancer. Beloved by everyone she worked with, managed and mentored, Sue Paterson was formative in the embrace New Zealanders gave to the arts from the 1980s through to the present day.

Her first defining role was as General Manager of Limbs Dance Company 1979-1986, the breakthrough performing contemporary company which packed opera houses and theaters throughout New Zealand under artistic directors Mary-Jane O’Reilly and Chris Jannides. The company performed at festivals in Australia, Hong Kong, Japan, Mexico, Papua New Guinea, and the United States where they performance at New York’s Lincoln Center to standing ovations and outstanding reviews, Limbs amassed nearly 200 original choreographies during its 18 years’ existence. In the foreword to Marianne Schultz’s 2017 book Limbs Dance Company: Dance for All People, Simon Wilson wrote ‘They were serious and comic, physically daring, shockingly sexy, innovative, political, beautiful of course, and so skilled. They were Limbs.”

Sue trained as a journalist in the early 1970s under Michael King and Christine Cole Catley at Wellington Polytechnic and started her 40 year career in the arts as an administrator at the Australian Elizabethan Theatre Trust which presented the Adelaide Festival of the Arts and toured international arts productions. Subsequent to Limbs’ she was Dance Programme Manager for the Queen Elizabeth II Arts Council of New Zealand (1990–1994), Marketing Director of the New Zealand Festival (1995–1998), General Manager of the Royal New Zealand Ballet (1999–2006), Executive Director of the New Zealand Festival (2009-2017), and a board member of the New Zealand Symphony Orchestra. Sue led the presentation of four New Zealand Festivals, five Wellington Jazz Festivals, four Lexus Song Quests, and a Royal Edinburgh Military Tattoo sellout season at Wellington’s Westpac Stadium. Her programming and marketing prowess saw the most innovative international and national artists and artforms presented to New Zealand audiences.

In 2004 Sue was made an officer of the New Zealand Order of Merit and in 2017 was named Metlifecare Senior New Zealander of the Year. The citation read:

Sue Paterson is a living legend in the dance and arts sector in New Zealand from her beginnings as the manager of Limbs Dance Company to her taking the reins at the Royal New Zealand Ballet Company and more recently at the New Zealand Festival where, as the Executive Director, she has built the festival into an event that bought more than $100 million into Wellington last year.

She has been inspirational with positivity, enthusiasm and brilliance as an arts manager creating enormous impact in leading New Zealand arts organisations, producing astonishing financial turnarounds, audience growth and clever programming with great ideas and a great understanding and experience of touring New Zealand.

Sue has belief in the arts and is patient, creating better lives for those who participate and witness great art a true taonga of the arts, a passionate woman of influence and a proud New Zealander.

In a Radio New Zealand interview published Friday, Sue’s successor at the New Zealand Festival Meg Williams talked about her legacy and incomparable ability as an arts marketer.

A memorial service for Sue will be held at the Opera House in Wellington at 3pm on Wednesday 18 July.