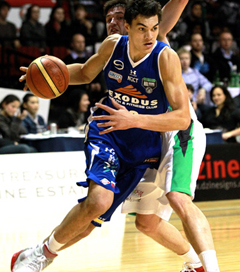 Steven Adams, 19, has become the first New Zealander to be picked in the first round of an NBA draft. Selected by the Oklahoma City Thunder, Adams is only the second ever Kiwi selected in the NBA draft, following former New Zealand international Sean Marks, who was selected in the second round in 1998. The Thunder are considered one of the elite teams in the NBA, featuring a slew of young stars led by 3-time NBA scoring leader Kevin Durant. During his post selection interview with ESPN, 2.3m (7ft) Adam’s revealed a New Zealand flag sewn on the inseam of his suit, and thanked his Kiwi supporters. “Thank you for all the support guys,” said Adams. “I’m pretty much doing it as a Kiwi, man. Always.” Adams, brother of Olympic Gold medal winner Valerie Adams, also became an instant millionaire, with his salary set to be approximately NZ$2.2 million in his first year. Reports are Adams decided to declare for the draft to support his parents and 17 siblings back home. Adams has told ESPN that his family were hoping he would be drafted by the Thunder, and are thrilled. ESPN analyst Jay Bilas said that while Adams is still developing he has some key attributes of an NBA player.  “He hasn’t played enough basketball,” said Bilas. “[But] you give him some time to develop and you could have something pretty good on your hands.” Adams grew up in Rotorua where he first got into basketball. He graduated Scots College in Wellington in 2011, when he enrolled at Notre Dame Preparatory School, a well-known US basketball prep school in Massachusetts, before continuing on to the University of Pittsburgh. Adams’ siblings are known for their tall stature and athletic ability – his brothers average 2.06m (6’9”) in height, and his sisters 6′, and in addition to sister Valerie, two of Adams’ brother have been members of the New Zealand Tall Blacks. Speaking of her brother, Valerie told Fairfax she was rapt he had achieved his dream. “I’m super, super happy for him,” she said. “It’s an amazing day for basketball in New Zealand and our family.”