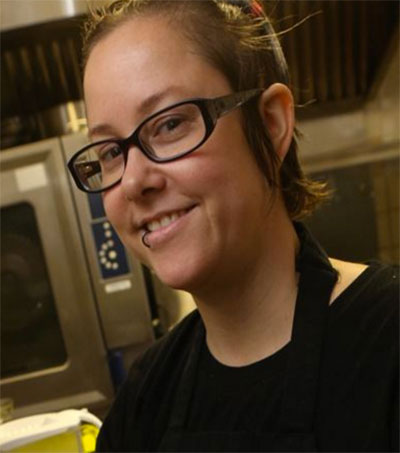 Vegan chef, Stephanie Hinton, 33, specialises in making aged artisan tofu cheeses – cheeze, to give them their proper name, and it’s one of the many ingenious creations the New Zealander is whipping up at the Drakes pub in Maidstone, Kent, after launching her menu earlier this month.

Hinton, who only turned vegan herself three years ago, launched Ponga Foods last year with a long-term goal of creating a chain of vegan delis.

After growing up on a farm in New Zealand, where she even hunted, Hinton trained as a pastry chef and worked in some top restaurants, including at Jamie’s Italian in Shepherds Bush and for MasterChef’s John Torode.

After moving out of London, she started working at Fortify Cafe in Maidstone’s High Street, which at the time was vegetarian, but graduated to vegan soon after she started there.

Hinton said: “My route to veganism was a pretty roundabout one. But I will never go back to eating meat or diary. What I make here is ‘plant-based’ pub grub.

“My speciality is veganising things. I’m working on making vegan sausages and salami by Christmas. I let the flavours do most of the work. It is about long, slow cooking.”