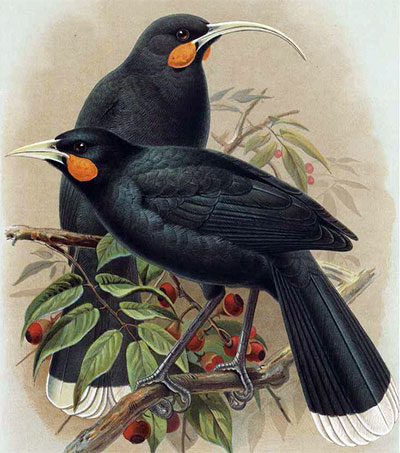 Sound Fossil of the Huia Echoes in Munich

As inhabitants of the Anthropocene age, in which our influence on the planet is so profound and terrifying, the Guardian asks how our writers and artists are responding to this crisis. Included in an exhibition on at the Deutsches Museum in Munich, American writer and conservation biologist Julianne Lutz Warren makes New Zealand’s extinct huia “an Anthropocene-aware artifact”.

It concerns the huia, an exquisite bird of New Zealand that was made extinct in the early 20th century due to habitat destruction, introduced predators and overhunting for its black and ivory tail feathers. The huia vanished before field-recording technologies existed, but a version of its song has survived by means of an eerie series of preservations: a sound fossil.

In order to lure the birds to their snares, the Maori people learned to mimic the huia song. This mimicked song was passed down between generations, a practice that continued even after the huia was gone. In 1954 a pakeha called RAL Bateley made a recording of a Maori man, Henare Kamana, whistling his imitation of the huia’s call.

Warren’s exhibit makes Bateley’s crackly recording available, and her accompanying text unfolds the complexities of its sonic strata. It is, as Warren puts it, “a soundtrack of the sacred voices of extinct birds echoing in that of a dead man echoing out of a machine echoing through the world today”. The intellectual elegance of her work – and its exemplary quality as an Anthropocene-aware artefact – lies in its subtle tracing of the technological and imperial histories involved in a single extinction event and its residue.

“An Anthropocene Wunderkammer” is on until 30 September.