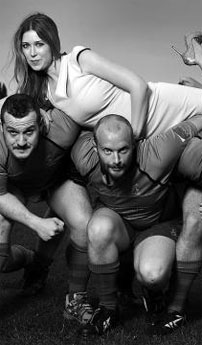 Soprano in the Scrum

New Zealand soprano Hayley Westenra has been snapped with a number of burly rugby players, after she was named as the official voice of the Rugby World Cup for audiences in the UK. Westenra’s version of World in Union is to accompany the games screened by ITV, which will be broadcasting from the opening match on 9 September to the final on 23 October. Westenra, who has sung the New Zealand national anthem at test matches in the past, is based in London. Her latest album Paradiso, produced by film composer Ennio Morricone, is set to be released in the UK on 29 August. Westenra was born in Christchurch. Her first internationally released album, Pure, reached No 1 on the UK classical charts in 23 and has sold more than two million copies worldwide.