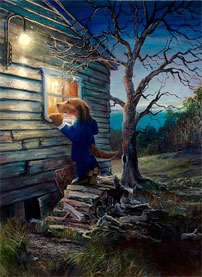 Queenstown-based artist Ivan Clarke’s book Alveridgea and the Legend of The Lonely Dog, co-written by with Stu Duval, is being developed as a feature film, with independent producer Jeff Kleeman. Clarke, previously best known for his landscape art, introduced the whimsical world of The Lonely Dog and Alveridgea in 2005 with a series of paintings that have been described as “a mixture of Monet, Bierstadt, Chagall and Dr. Seuss.” “The Lonely Dog’s story has evolved as part of what I call the ‘theatre of imagination,’ and what I hope is a loving homage to the age-old art of storytelling,” Clarke says.