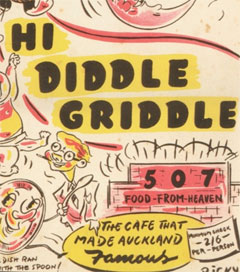 In the column “Postcard, from New Zealand”, originally appearing in The San Francisco Chronicle on 8 February 1966, American travel writer Stanton Delaplane said: “I must say the country is much improved for the tourist. When I was here a few years ago, the pride of Auckland was a windy nightclub-restaurant called the Hi Diddle Griddle. Now there are several good restaurants. The Gourmet is still operating and there’s La Boheme, Palermo, El Matador and Toby Jug.” Furthermore: “It is pretty, rolling country. Grass-green, dotted with white clouds of New Zealand sheep. If you start counting sheep, you’ll never make it… [and] the trout streams along here are a fisherman’s dream.” Delaplane began his syndicated humorous travel column, “Postcards” in 1953.