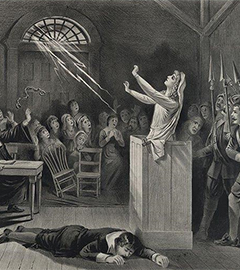 Robert Bartholomew, a sociologist in New Zealand and expert in mass hysteria, is warning how Facebook and Twitter have the potential to act as global carriers of mass hysteria. The most famous instance of mass psychogenic illness, or hysteria, is the 17th Century Salem Witch Trials. But the past five years have seen a “sudden upsurge” in episodes of hysteria amongst US youth – and social media is part of the complex interchange of symptoms.

Bartholomew says there is “potential for a far greater or global episode unless we quickly understand how social media is, for the first time, acting as the primary vector or agent of spread for conversion disorder”.

Conversion disorder is the name given to psychological stresses, such as trauma or anxiety, that lead to physical symptoms. It is when the symptoms are spread to other people in a process known as mass psychogenic illness that it becomes “contagious”.

Famous international examples of mass hysteria include the 19th Century Writer’s Palsy, which struck down swathes of society following the introduction of the pernicious ballpoint pen; the turn of the 20th Century saw phantom dirigibles sighted across the world, including in New Zealand, when the new invention was barely in the skies; unidentified flying dirigibles became UFOs following the Roswell incident in 1947; the 1980s heralded repetitive strain injury in a modern version of writer’s palsy; a decade later, recovered memory syndrome resulted in a plethora of lurid, Satanic crimes in otherwise peaceful communities.

Today, teenagers at Danvers, Massachusetts, a town also known as “Old Salem,” are suffering from a mysterious outbreak of hiccups and other vocal tics. Two years ago, 18 girls from Le Roy, in New York, came down with a genuine outbreak of hysteria, exhibiting symptoms which once afflicted a generation of gentle English women in the 19th Century.

Social media played a key role in the recent cases and Bartholomew says it is “just a matter of time before we see outbreaks that are not just confined to a single school or factory or even region, but covering a disperse geographical area and causing real social and economic harm.”