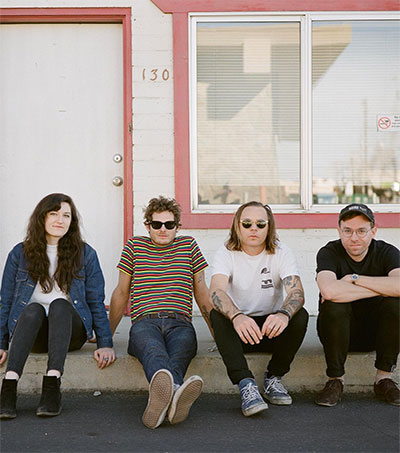 Smokescreens is a New Zealand band currently based in Los Angeles. Founded by Chris Rosi following the demise of his previous band, Plateaus, the group recently performed at the Hotel Congress in Tucson, Arizona. The show was previewed by B.S. Elliot for the alternative publication, Tucson Weekly.

“The Smokescreens are cursed with seeing through life’s bullshit (which, really, is the true definition of cool.) Whether envying happy-go-lucky fools who ‘never ever feel blue’ or kicking around with ‘nothing to do’, they don’t allow themselves wishes because those ‘never come true’,” Elliot writes.

“Ah, but their cynicism is lushly enveloped in fuzzy layers of ear-bending descending guitar. Lest the listener gets too passive and comfy, a driving backbeat kicks in, forever opening eyes to the flawed, decaying world. Like the Velvet’s ‘I’ll Be Your Mirror’, but without sexual placation, Rosi’s vocals still manage to help stave off lonely blues.

“The Smokescreens’ blend of obscure Kiwi pop and New York art rock offers an impassioned appeal to realists – the world might suck but we’ve all got to live here anyway. The quartet wisely swerves from clever-clever land into a realm of jaded acceptance – these are the letdown musings of a bunch of romantics.”

Smokescreens are Rosi, Brice Bradley, Corey Cunningham and Jenny Moffett. Their album Used To Yesterday was released in the United States in July.

Parris Goebel is no stranger to being on a global stage. So she dived right in when given the assignment of a lifetime: choreographing for Jennifer Lopez, at the Super Bowl…