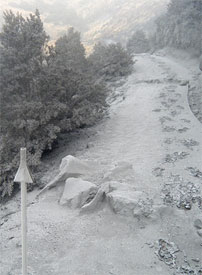 Mount Tongariro, dormant for more than a century, roared into life on 6 August erupting boulders and spreading an ash cloud over the centre of the country. The spew of rocks, fine particles and steam from the snow-capped 1978m peak was caused by a pressure buildup of volcanic gases, volcanologists said, after an increase in seismic activity over the recent weeks. Steve Sherburn, volcanologist at New Zealand’s Institute of Geological and Nuclear Sciences, said the scale of the eruption was unexpected. The last time Tongariro erupted was in 1897, ending a decades-long period of intermittent activity, and Sherburn said Monday’s explosion could be the start of more such activity in the area. “At the moment we really don’t know, it could just be a singular event, or it could be the start of a period similar to what we’ve seen historically,” he said.