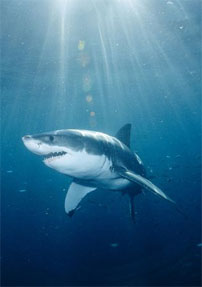 Scientists from the National Institute of Water and Atmospheric Research (NIWA), Department of Conservation (DOC), and University of Auckland have discovered that the great white shark, can travel thousands of kilometres on seasonal migrations, returning to exactly the same home area. The six-year study tracked the movements of great white sharks around New Zealand’s remote islands. In April, the scientists tagged a record 27 great white sharks around the Titi (Muttonbird) Islands off the northeast coast of Stewart Island, adding the 31 sharks previously tagged since 25. NIWA principal scientist Dr Malcolm Francis said: “The pieces of the puzzle are gradually coming together. We knew that most of our white sharks emigrate from New Zealand during winter. Now we have discovered that many, perhaps most of them, make the return trip to exactly the same place in New Zealand.”