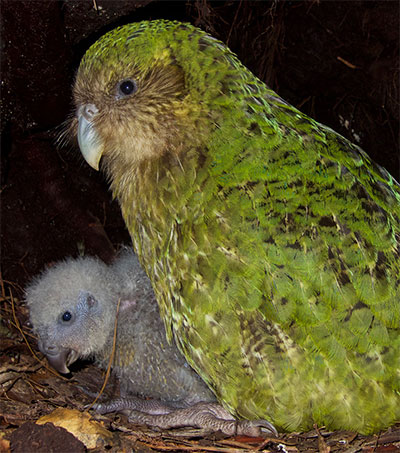 Record-Breaking Breeding Season for the Kākāpō

The world’s fattest species of parrot, the kākāpō, has had a record-breaking breeding season in New Zealand, with scientists saying the fortunes of the critically-endangered bird are finally turning around.

There are only 147 adult kākāpō alive today, although a few hundred years ago they were one of New Zealand’s most common birds, before being hunted to the brink of extinction, killed by introduced pests, and losing their forest homes to farming.

The nocturnal, flightless parrot is one of New Zealanders’ favourite birds, and is known for its charismatic nature and owl-like face.

Because the population is so small every kākāpō has a name – including Ruth, Hoki, Suzanne and Zephyr – and is subject to one of the most intensive management programmes of any species in the world. Infertility and in-breeding have been long-term issues for the birds’ reproductive efforts.

But this year 76 kākāpō chicks have hatched and 60 are expected to make it to adulthood, the result of heavy seeding in the New Zealand bush that has produced an abundance of the bird’s favourite food: fruit from the rimu, a southern species of conifer.

Forty-nine out of 50 breeding females laid eggs this year. The last record-breaking breeding season was in 2016, when 37 chicks fledged.

“In the last two seasons there have been huge quantities of fruit not seen for 50 years, so that’s why all of the female kākāpō know it is time to breed, and actually started much earlier than usual, meaning some have now been able to nest twice,” Digby says.

Every kākāpō in New Zealand has a smart transmitter attached to its body, and remote monitoring systems are embedded in their nests. Rangers also check chicks every night while they are growing, and there are currently seven chicks being hand-reared by DoC staff.

The population would have to get up to “at least 500” for the scientists to think about backing off, Digby says.