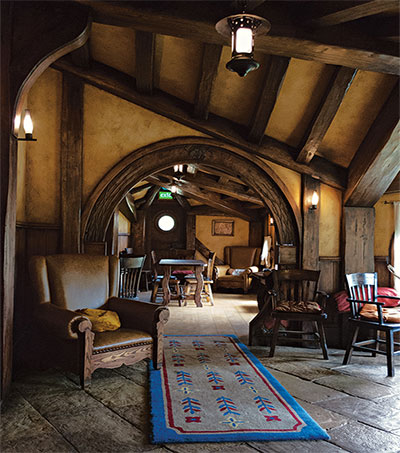 Settling in over a Beer at Hobbiton’s Green Dragon

“In New Zealand, even a nondescript cutting in the woods can lead somewhere extraordinary. That magnetic pull to see what’s around the next bend, whether sparkling glacier or primeval forest, is my favourite thing about the country – its ‘round-the-corner-ness,’ as I call it,” Carrie Miller writes for National Geographic Traveler.

“Here on a sheep farm in the valley of the rugged Kaimai Ranges, I feel the buzz. A clearing opens, and I step into a story. The vista in front of me also struck native filmmaker Peter Jackson. Recognising the spot instantly as Hobbiton, the hobbit community written into legend by J. R. R. Tolkien in The Hobbit (1937) and The Lord of the Rings (1954), Jackson immortalised it on screen in six movies, the last of which came out in 2014.

“Each detail at Hobbiton is a labour of love of Jackson and his team of wizards – right down to the moss on the fences, explains our affable tour guide, Aidan O’Malley, on one of 17 daily tours. ‘Jackson decided to reverse the natural sunrise and sunset here, so he also changed the moss on the fences to reflect that,’ O’Malley says.

“After touring the grounds, I wind down the day at the Green Dragon, Hobbiton’s working pub that appeared in the films. A fire roars in front of us, the sunset glowing through the round windows at our sides. Massive macrocarpa beams cross the ceiling, carved with grapes, barley, and a serpentine dragon in faded green. Herbs hang in the kitchen. Celtic music pipes gently overhead. I settle deeper into my leather armchair, and take another sip from my clay mug of beer.”