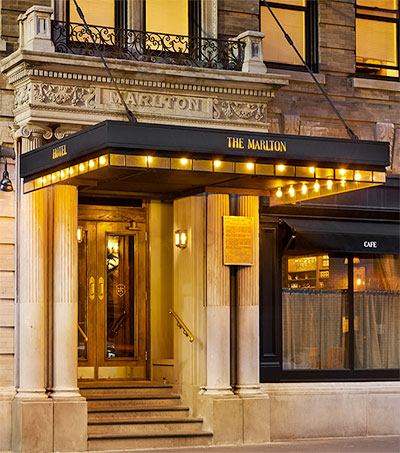 In 2013, New Zealand-born hotelier Sean MacPherson “decided to turn his attentions to a Greenwich Village flophouse that used to host the likes of Jack Kerouac back in the literary heyday of New York.” Now, the Marlton has been “stunningly converted from an NYU freshman dorm into one of New York’s hippest hotel.”

Originally built in 1900, “the Marlton is a labour of love for me,” MacPherson tells travel site Wandermelon, “and my hope is that it becomes an integral part of this revitalising street. The rooms are a sophisticated oasis in the heart of the historic Village, and I hope to see the common space become a sort of living room for the community.”

Less than two years and US$10 million later, The Marlton is absolutely buzzing and perfect for frugal hipsters not looking to sacrifice style for cents. With 107 rooms, including two penthouse suites with terraces, the on-site Margaux restaurant, a cocktail and espresso bar, the hotel oozes with Parisian charm and yet hasn’t lost any of its American heritage or bohemian ambiance, mixing up the old with the new in whimsical ways thanks to MacPherson’s own design handiwork.

MacPherson is also the owner of The Bowery Hotel, The Maritime and The Jane.