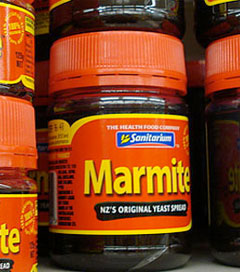 New Zealand’s favourite breakfast spread, Marmite has returned to supermarket shelves for the first time in over a year, after shortages caused by the Christchurch earthquake. “You’ve rationed, you’ve scraped, you’ve survived marmageddon – and now the wait is over!” Sanitarium said on its website. The February 2011 quake damaged the only factory in the country that produces Marmite, forcing it to close. Stocks then dwindled, leading to shortages dubbed “marmageddon” by media, from early 2012. Marmite was first brought to New Zealand in the 1900s but the country came up with its own version, which has its own distinctive taste.