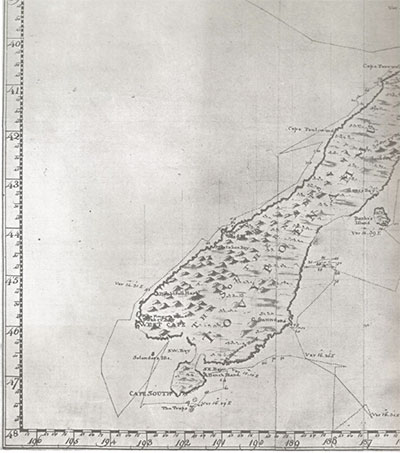 For the Sake of Britain James Cook Amended NZ Map

In an extract from a paper called, “Political Captain Cook” by Australian lawyer Margaret Cameron-Ash, Cook’s decision in 1770 to misrepresent Stuart Island as a peninsula is discussed.

“Like every military man, Cook knew that an island of consequence off a nation’s coast, or along its trade route, is a liability,” Cameron-Ash writes. “The expense of fortifying the island is too great, yet if publicised it provides the enemy with a base and sanctuary.

“Cook was the first European to explore New Zealand and he liked what he saw. He admired its people, its fertility, its products, its harbours and its geopolitical position in the new emporium of the Pacific. Such a jewel must not be relinquished to Britain’s European rivals.

“Cook knew that Stewart Island would provide benefits to any of Britain’s rivals bent on invading New Zealand. He also knew that the Admiralty’s unwritten instructions were to omit, misrepresent or deny discoveries of strategic or commercial importance which might benefit Britain’s enemies.

“Cook believed he was duty-bound to misrepresent Stewart Island as a peninsula. So he opened his journal at the entry for Sunday 11 May 1770, and rubbed out the seven lines describing Foveaux Strait. Then, writing over the erasures, he penned his extraordinary statement which would airbrush the strait from the map for the rest of the century:

“‘But when I came to lay this land down upon paper from the several bearings I had taken it appear’d that there was but little reason to suppose it an Id. [island]; on the contrary I hardly have a doubt but what it joins to and makes a part of the main land.’

“Having amended his journal, Cook now provided corroborating evidence. He drew a second chart showing New Zealand as two islands, not three, with the two southerly islands joined by an isthmus. This map also is held at the British Library, and referred to as Folio 17.

“Folio 16 is the most accurate of Cook’s charts of New Zealand, but the Admiralty chose to publish the retrograde Folio 17. When the Endeavour arrived home in July 1771, Cook delivered his journal and charts to the Admiralty. Folio 16, the chart without the isthmus, was filed away in the Admiralty Office in Whitehall.”