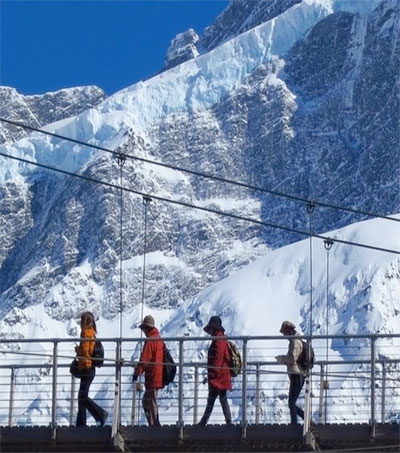 Even with the mist covering the tallest of them, the Southern Alps rising up around the Hooker Valley have a humbling stature, Abu Dhabi’s English-language publication the National reports in a travel feature about the Aoraki/Mount Cook area.

“The glaciers in front once covered the valley floor, but an indication of just how hostile they are comes from the journey time to the more famous Fox and Franz Josef glaciers on the other side of New Zealand’s tallest peaks.

“The position of the Southern Alps has long made them a tricky training ground for pioneering mountaineers. Many of the 300m-plus climbs are technically difficult, but an element of danger is added by the notoriously changeable weather.

“Once over the top, it’s pretty much a straight drop down to the Tasman Sea – and the fronts blowing in from there add a tempestuous maritime climate to the height and unflinchingly steep gradients.

“On one of those wet, gale-wracked days, it’s worth dipping into The Hermitage Hotel – which has provided shelter for explorers in Mount Cook Village since 1884. It’s home to the Sir Edmund Hillary Alpine Centre, named in honour of the man who, along with Sherpa Tenzing Norgay, became the first to scale Everest.”