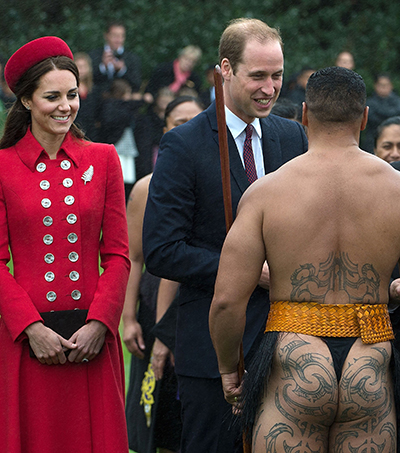 News outlets worldwide have lately been splashing a bare bottom on their front pages – but it’s not what you think. Upon their arrival to New Zealand the Duke and Duchess of Cambridge received a formal greeting from a tattooed warrior in Wellington, prompting worldwide intrigue of Maori culture and greetings.

George Mana, a warrant officer in the Royal New Zealand Air Force, was the warrior who issued the wero, or challenge, to the Duke, and has since become a worldwide hit. Mana, a Maori cultural adviser to the Chief of Air Force, lives in Palmerston North with his wife, Ngatasha – also understood to work for the air force – and their children. He is affiliated with Ngati Koroki Kahukura, which is centred near Cambridge in Waikato.

The Guardian spoke to M?ori tattoo expert Tim Worrall, who explained that the warrior’s taurape (buttocks tattoo) and puhoro (thigh tattoo) emphasise the engine room of the warrior’s body. “The largest muscles, the means by which the warrior remains agile.”

Worrall is from the staunch T?hoe iwi and has been working as a t? moko artist for 15 years. A cultural adviser on the film Whale Rider, he also worked as a creative consultant and graphic designer for the Rugby World Cup 2011 opening ceremony.

The patterns seen are commonly associated with warriors and, says Worrall, “express his essential vitality”. There’s the motif of the koru, the end of an unfolding fern, representing connection to the natural world. “This warrior also has manaia forms in the moko on his back.

Manaia symbolises the connection between the different realms. These curvy linear expressions, made up of positive and negative spaces, refer to the spiritual and temporal worlds.”

In M?ori culture red is the highest status colour and signifies prestige and authority. “Many Maori appreciated the red dress that Kate Middleton wore: this colour represents mana [high status] in Te Ao Maori [the Maori world]. Traditionally, high-status individuals would wrap themselves in red ochre for an event like this.”

During the powhiri, Prince William experienced the wero (challenge), an ancient part of the ritual of encounter and coming together. The warrior placed a dart called a rake tapu at his feet, which he picked up while maintaining eye contact with the warrior to show that he came in peace.

“They evoke a response which reveals the nature of the guests’ arrival, and are also an acknowledgment of the mana of the guest.”

Worrall thought the royals did very well. He said the Duchess of Cambridge gracefully received a hongi, a traditional M?ori greeting where noses are rubbed together, from Maori elder Lewis Moeau (a descendant of rebel chief leader Te Kooti, who famously fought the British Crown). “The hongi is about the sharing of breath, the life force.”

Combined with waiata (song) and haka (dance) the welcome is a spiritually charged experience, invoking the supernatural world and the ancestors of the participants. “Ihi [awe] is the spiritual charge where the hair on the back of your neck stands up.” 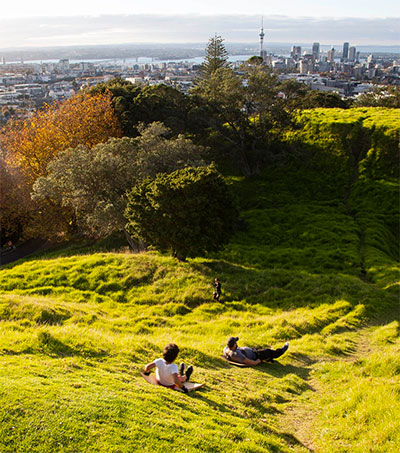