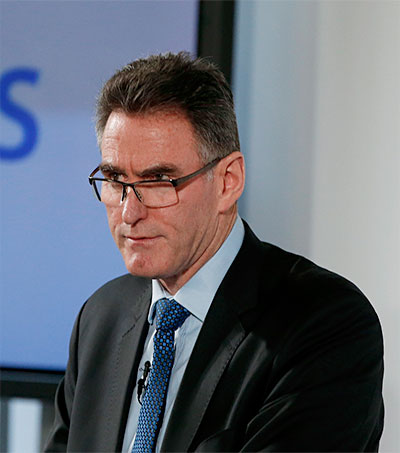 Almost a year to the day since the Hawke’s Bay-born retail banker Ross McEwan replaced Englishman Stephen Hester at the helm of Royal Bank of Scotland (RBS), the bank appears in much greater health.

Inessential parts have been sold off, the bank’s toxic loan book is much smaller, and there is even chatter of demand for a government share sale picking up.

“I arrived with a fundamental optimism about what we could achieve in this business, and after a year as CEO, that optimism is stronger than ever,” McEwan, 57, told the audience at a recent banking conference.

After the conference, he later quipped to a gaggle of reporters that even as a recent market sell-off was troubling much of the financial community, the bank’s efforts to clean itself up meant he wasn’t losing any sleep.

This week, RBS ought to serve up further evidence of the bank’s recovery. Quarterly operating profits are expected to have hit a post-crisis high, and impairment losses – the cost of writing off bad loans – will have fallen substantially.

RBS’s peers can expect similar stories. Britain’s economic revival, and the surge in property values that has accompanied it, has significantly improved the picture for the UK’s lenders.

Across-the-board profit rises this week will paint a picture of an industry starting to recover from many years of difficulties.

But – as McEwan and his counterparts are fully aware – the rules of the game have changed forever.