NZEDGE  >  News  >  Society  >  Reviving the Legacy of a Great Chieftain 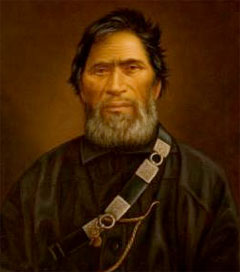 Reviving the Legacy of a Great Chieftain

“After 150 years of marginalisation, things are finally looking up for the [Ngati Haua],” Yasmine Ryan writes for Al Jazeera. “The central New Zealand town of Matamata is world renowned for its thoroughbred horse industry. English-style estates with elaborate fencing sell for millions of dollars. On the main strand of this booming farming region, however, there is little to suggest that it was the heartland of the once mighty Ngati Haua, a tribe whose chief Wiremu Tamihana played a leading role in the formation of Maori King movement, an indigenous autonomy organisation that emerged in the mid-1850s. Last week, New Zealand’s government signed an agreement with the tribe’s elders, recognising it acted ‘unjustly’ and offering a combination of financial and cultural redress. The signing took place on a site south of the city of Hamilton, where in 1863 Tamihana reached out to the invading British forces in a gesture of peace. ‘When so much of our land disappeared, it individualised us in a lot of ways. We lost our way,’ Mokoro Gillett, a member of Ngati Haua who has played a key role in the negotiations, told Al Jazeera. ‘The loss of land sent us in another direction, so it was really crucial to us that the Crown acknowledge that,’ said Gillett, who serves as co-chair on the Ngati Haua Trust Board. The signing makes Ngati Haua the latest tribe to sign such an agreement in a nationwide process aimed at addressing all historic Maori grievances. For most tribes, the settlement process is about more than financial compensation. It is an opportunity to have their historical experiences officially acknowledged, and to build the foundation for a better relationship with local and national authorities. For Ngati Haua, that means reviving the legacy of their great chief, Wiremu Tamihana. ‘We’ve always felt the Crown didn’t treat us well, not so much nowadays, but our ancestors, especially Wiremu Tamihana,’ Gillett said. The community of Ngati Haua has taken steps to bring about a renaissance for their people in recent decades, reviving their culture, language and political influence. The settlement will help with these activities, officials said. ‘What I am noticing is that there’s far more pride in local Maori in the area now that they have got recognition and are working in partnership with ourselves and various other bodies,’ Hugh Vercoe, mayor of Matamata-Piako, said. The settlement grants them more direct say in the administration of local environmental sites and waterways. It provides more resources to devote to local initiatives – such as the school founded by Gillet – to teach the tribe’s children in the regional dialect of the Maori language and offer them a brighter future.”