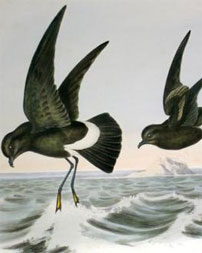 Return of the Storm Petrel

DNA evidence has confirmed that the tiny New Zealand storm petrel bird, thought to be extinct for more than 150 years, is still alive, meaning its comeback eclipses that of other “extinct” birds like the takahe and Chatham Islands taiko. It was rediscovered in 2003 by birdwatchers Ian Saville and Brent Stephenson in the Hauraki Gulf, but there was confusion about where and how the bird survived, and whether it was actually a separate species, or just a more common species of storm petrel, with odd colouring. But the University of Otago’s Bruce Robertson has now matched DNA from the Hauraki Gulf birds to tissue fragments from three museum specimens in England and France, confirming they are the same species. That confirms that the birds in the gulf are the same as those last seen in the 1800s, and that the New Zealand storm petrel is a distinct species. “I think that’s pretty huge,” Robertson said.