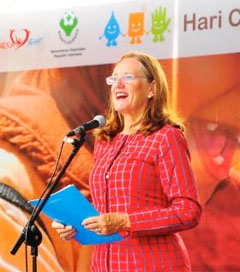 UNICEF representative in Indonesia, New Zealander Angela Kearney is responsible for leading a staff of 150 to carry out the duty of realizing the rights of every child in the country.

Besides Jakarta, UNICEF also has several branch offices spread across Indonesia, from Banda Aceh, Surabaya, Kupang, Ambon, Makassar to Jayapura and Manokwari. Though Kearney is fortunate to have a rock-solid team that is highly dependable, as chief leader of the organization, she is primarily held accountable.

Moreover, Kearney is accountable for human resources. She says that all UNICEF employees, including her, must be “honest, absolutely transparent on what we do and must have integrity.”

Kearney visits each of the seven UNICEF branch offices in Indonesia at least three times a year. “I come to see the political leaders as well. So I often meet with the governor and legislature.”