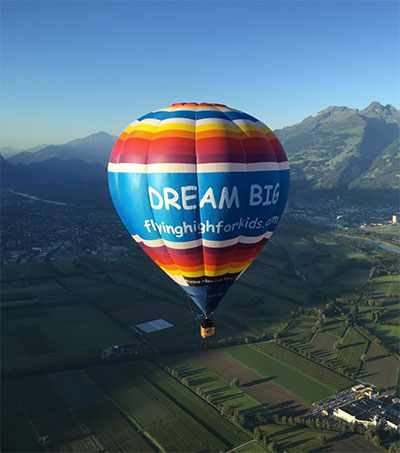 For the past four years, New Zealander Andrew Parker has been travelling the world with his hot air balloon as part of the inspiring project Flying High for Kids, that aims to spread cultural diversity and promote children’s rights to education.

Using the UNICEF brand on the face of the bright balloon, Parker tethers the impressive craft at schools and not-for-profit projects in the countries he visits, with the aim of raising funds for UNICEF and drawing attention to the needs of children in developing countries.

The project also sees Parker running a cultural exchange scheme, facilitating a postcard and letter-swap programme that allows children in the different countries that he visits to communicate with each other.

“I had the idea of flying for a cause back in my early teens and it has stayed with me ever since. I started planning in 2010 and it was a dream come true when the project began. I’ve flown balloons in many countries but I’ve never had the chance to do something on this scale,” Parker said.

Over the past few months Parker has travelled through Africa, visiting Egypt, Sudan, Ethiopia, Kenya, Uganda, Rwanda, Malawi, Zambia, Zimbabwe, Botswana and Namibia, and next year he plans to continue his journey by going to South Africa before shipping the truck and balloon to Colombia where he will follow a route through Central and North America.

Parker is a commercial hot air balloon pilot originally from Hamilton. The Flying High for Kids project was launched on 9 December 2013.