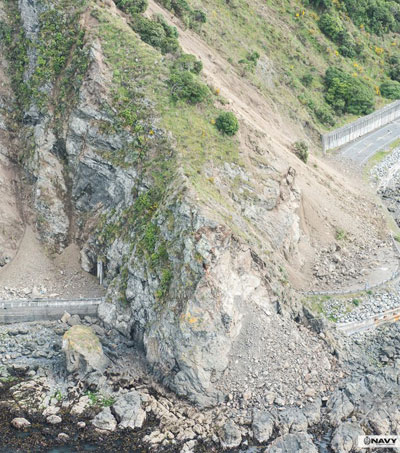 Rescue Under Way For Thousands Stranded By New Zealand Earthquake

Following Monday’s 7.5 earthquake near Hanmer Springs on New Zealand’s South Island, which saw two people dead and several injured, “military helicopters and a navy ship dispatched to coastal town of Kaikoura with buildings across swathes of country being checked for damage,” writes Eleanor Ainge Roy for The Guardian.

“Military helicopters and a navy ship were dispatched to rescue about 1,000 tourists and hundreds of residents stranded in the coastal town of Kaikoura, which was cut off from land access,” as reported in the article.

“There’s a real imperative to support the town because it can’t support itself.”

Kaikoura had “two days of clean water supplies after the council’s water tank sustained major damage”, “helicopters were flying in water bladders and water engineers to try and re-establish a clean supply” and people were being told to “urgently conserve the existing supply and use it for drinking only.”

“Webb said the military planned to begin using four NH90 helicopters that could each transport about 18 people out of the town at a time.”

“We’re going to get as many people and belongings out as quickly as we can,” said Webb.

“The New Zealand Transport Authority was working with contractors to urgently clear an inland route to the town in the coming days,” as reported in the article.

Rescue efforts were slowed by frequent aftershocks – up to 800 since the quake – as well as bad weather that continues to lash the quake-hit areas.

The New Zealand Transport Authority was working with contractors to urgently clear an inland route to the town in the coming days, though their efforts were hampered by frequent aftershocks – up to 800 since the quake – according to GeoNet.

New Zealand’s Prime Minister John Key, who visited quake-affected areas on Monday in a military helicopter, “said the destruction was much worse than he had realised.”

“So the slips here are horrendous … and you’ve got to believe it’s in the billions of dollars to resolve these issues, they’re huge slips … I’m not sure how long it will actually take to move this level of rubble off the road, not to mention the damage to the railways,” he said.

The earthquake was felt across several parts of the country and caused damage in New Zealand’s capital Wellington. While most businesses reopened on Tuesday in Wellington, some remain closed due to signs of structural stress.