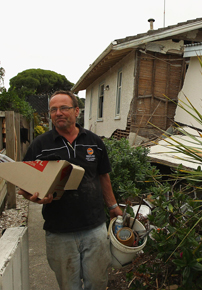 Thousands of Christchurch home owners are breathing a sigh of relief following John Key’s announcement on the future of their properties. Entire suburbs of Christchurch are to be abandoned due to unstable ground following the severe earthquakes that hit the city in September and February. While the outlook sounds grim, most of the owners of the 5, homes affected are just happy to get some clarity as their future was previously uncertain due to the extensive damage on their properties. “It’s a really positive move for us,” says red zone resident Rebecca Wilkes. “We felt stuck here … it is probably the ideal outcome, we will probably be financially better off. All insured property owners in the area known as the “red zone” will have the choice of selling their house and property to the government at their most recent valuation price, or working with their insurers to achieve a settlement. As aftershocks continue in the shaky city, Mayor Bob Parker has committed to help residents relocate within the city, saying Christchurch will be rebuilt albeit not in exactly the same location.