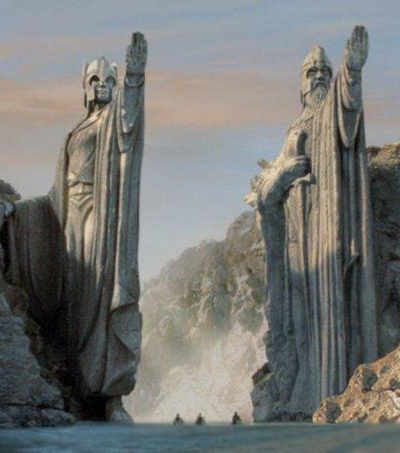 In Peter Jackson’s “The Lord of the Rings” J.R.R. Tolkien’s Middle Earth is “composed of dozens of incredible locations around New Zealand,” and “the natural beauty of New Zealand’s lush countryside and icy blue rivers is almost as magical as Tolkien’s fictional world”, writes Madison Malone Kircher in an article in The Business Insider.

Many of these film locations are popular tourist spots – read about some of them below.

1. Hobbiton: In the Hobbit village located in Matamata, visitors can see the houses of their favourite Hobbits.

2.’Paths of the Dead’: “Massive rock structures mark the ‘Paths of the Dead’ a haunted trail leading through the White Mountains” in Middle Earth. In the real world they are known as ‘Putangirua Pinnacles’ – “an eroded geological structure dating back thousands of years”.

3. Edoras – capital city of Rohan: In Middle Earth Edoras was home to the people of King Théoden. Even though the film set was demolished when filming concluded, visitors can still “marvel at its setting atop New Zealand’s Mount Sunday in Canterbury.”

4. Giant stone archway Rivendell: Tourists often take pictures under the stone archway Frodo and his friends exited through when leaving the Elven City of Rivendell, which is located in the Kaitoke Regional Park in Wellington in real life. In the more than 6000 acres large park fans can also walk on different trails to experience Rivendell themselves.

5. Weathertop: The original land used for the scenes in which Aragorn leads Frodo towards Amon Sul’s watchtower is located on private land, but fans can still get an impression of similar limestone structures in nearby areas of Port Waikato according to the article.

6. Anduin River: In the movie, Frodo and his friends “paddle past the massive Pillars of the Kings” alongside the river. While the statues were digitally created for the film, the Kawaru River in Otago is still a popular tourist location for Middle Earth fans.

7. Mount Doom: The mountain’s fires are the only way to destroy the ring in the movie. Mount Ngauruhoe, a 2,500 year old active volcano was used as Mount Doom for ‘The Lord of the Rings’ trilogy.