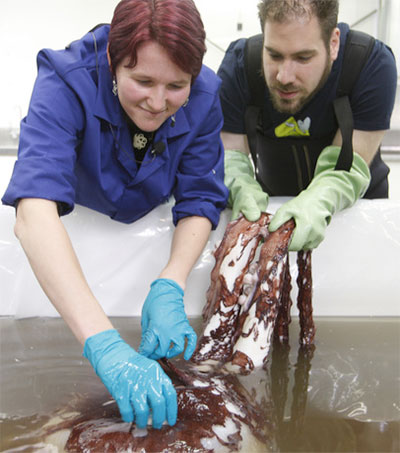 The colossal squid hauled from the depths of Antarctica’s Ross Sea by a New Zealand fishing crew last year has local scientists very excited, as it is one of very few ever examined.

The 350kg squid, a mammoth creature the length of a minibus and seldom seen by any living thing other than the deep-sea creatures it preys upon, was frozen for eight months until New Zealand scientists got the chance to thaw it out for examination.

Kat Bolstad, a squid scientist from the Auckland University of Technology, led the team examining the creature. She described this rare specimen as “very big, very beautiful”.

The squid is a female and its eight arms are each well over a metre long. Its two tentacles would have been perhaps double that length if they had not been damaged. “This is essentially an intact specimen, which is almost an unparalleled opportunity for us to examine,” Bolstad said. “This is a spectacular opportunity.”

Toothfish boat captain John Bennett and his crew on the San Aspiring have now caught two giant squid. Their first, hauled in seven years ago, is on display in Te Papa.

Bennett said there was so much excitement about his previous catch, he thought he had better save the latest one for research. “It was partly alive, it was still hanging on to the fish,” Bennett said. “Just a big bulk in the water. They’re huge and the mantle’s all filled with water. It’s quite an awesome sight.”