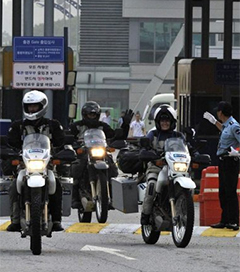 Five New Zealand motorcyclists have successfully crossed the world’s most militarised border as part of a ride for peace across the Korean Peninsula.

The rare crossing saw the New Zealanders pass through the demilitarised zone that has divided the peninsula since the end of the Korean War. Permission to cross the border between North and South Korea is rarely granted, with travellers typically having no choice but to fly via. Beijing.

The two nations allowed the group to cross along a corridor near the Peninsula’s west coast that is used by South Korean visiting the jointly run Kaesong factory zone.

The crossing was a key part of the bikers 9,000 kilometre journey, which began in Magadan, Russia, in which they aim to ride the entire length of the Korean Peninsula’s mountainous spine in an effort to bring peace to the region.

Gareth Morgan, one of the bikers explains: “We’re riding between Baekdu-san and  Halla-san to make the point really that Korea has a 5,000 year history… Korea really is one country – this issue we all face is how do we get back to that?”