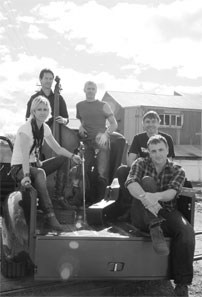 Possums and Their Strings Hit US

New Zealand bluegrass group The Johnny Possum Band have announced tour dates for their 2012 tour of the United States. “The Johnny Possum Band has been delivering their own brand of alt country/bluegrass/folk music featuring guitar, fiddle, mandolin, banjo and upright bass since forming in 2005,” music site Cybergrass explains. “The first [visit to the Unites States] in 2007 saw them receive the ‘Rising Legends’ Award from the National Old Time Country and Bluegrass Association. The band will be returning for their third visit in October 2012.” Band members are: Sean Whittaker (vocals and banjo), Keith Taylor (vocals and guitar), Bryan Peters (vocals and mandolin), Margaret Pickering (fiddle and vocals) and Jonathan Rosanowski (upright bass).