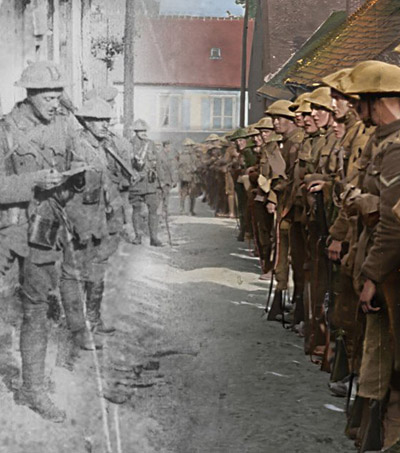 “A new 3D film by director Peter Jackson is set to bring the First World War to life in a way never seen before,” writes Laura Lambert in an article in The Daily Mail.

“The Oscar-winner has restored and colourised 100-year-old footage from the Imperial War Museum’s vast archive, and early photos suggest the results will be remarkable.”

“Explaining the painstaking process of restoring the footage”, Jackson said:

“We started to do some experiments and I was honestly stunned by the results we were getting. We all know what First World War footage looks like. It’s sped up, it’s fast, like Charlie Chaplin, grainy, jumpy, scratchy, and it immediately blocks you from actually connecting with the events on screen.”

“But the results are absolutely unbelievable… This footage looks like it was shot in the last week or two, with high-definition cameras. It’s so sharp and clear now.”

“’The faces of the men just jump out at you. It’s the faces, it’s the people that come to life in this film. It’s the human beings that were actually there, that were thrust into this extraordinary situation that defined their lives,” he said.

“Jackson and his team also combed through the BBC Archive, going through around 600 hours of audio interviews with veterans that had been recorded from the 1960s to the 1980s,” reports the article.

The project, which is part of a “season of events arranged by arts organisation 14-18 NOW,” will be shown in every secondary school in the country to improve children’s understanding of the war.”