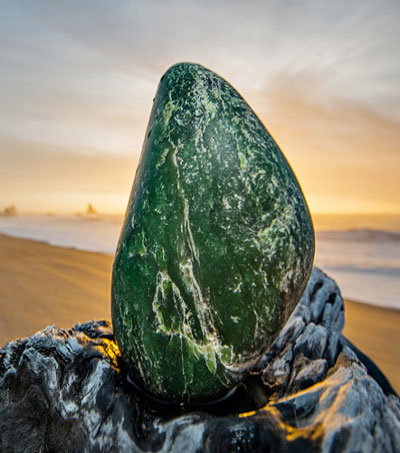 “Te Wahipounamu, the place of jade. Since 1990 this southwestern edge of New Zealand has enjoyed World Heritage recognition for its four national parks and interconnecting tracts of conservation land,” Kennedy Warne writes for National Geographic. “Of all the wilderness areas in my country, this is the one I return to most often, to breathe its mountain air, wade its rivers, hike its forests, and absorb its presence.

“[Carver Jeff Mahuika] and I are walking in the Cascade Valley, an hour beyond the end of the coast road, where it terminates south of Haast. Over our shoulders the Red Hills Range glows dark crimson in the afternoon sun. The pounamu in the rivers comes from those hills. The same tectonic forces that built the mountains made the stone.

“When Maori were lords of this land, no resource was held in higher esteem than pounamu.

“To handle such treasures today – in the form of chisels, ear pendants, fighting clubs – is to sense a link not just with the maker and owner but also with the physical ancestry of the stone.

“Maori maintain a presence here, though their numbers are thin. A symbolic moment came in 2005, when Mahuika’s people opened a carved meetinghouse, their first ceremonial house in 140 years. It was a statement of survival and of hope but also an acknowledgment of human impermanence, a truth expressed in a Maori proverb: People come and go, but the land endures.”