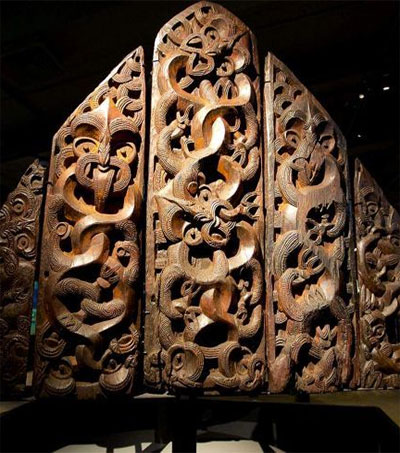 Five intricately carved storehouse carvings have been returned to New Zealand after 150 years buried in a swamp and 40 years exile in Europe.

They are the Motunui epa and once were almost sold off to pay for a kidnapping ransom and were the centre of four decades of international legal wrangling.

Two hundred years ago, the epa adorned the back wall of a Maori storehouse for food.

Now they slowly rotate within arm’s length of visitors at Puke Ariki museum in New Plymouth.

“There was no way we would ever have thought that they would come home,” said Mahau Waru, kaumatua of Ngati Rahiri, the sub-tribe that has cultural guardianship of the Motunui epa.

The epa are thought to date from at least 1820, when they would have graced the end wall of a pataka. Fearing these treasures of the Taranaki region would be destroyed or stolen by raiders, they were buried in wetlands at Motunui, just north of New Plymouth.

They lay buried for at least 150 years until 1972, when a local, whose name is recorded in legal documents as Manukonga, found them.

The five panels were, according to local lore, then kept in a garage until a London art dealer got wind of the find and came to New Zealand to see what was described later as “of the highest importance to Maori art and civilisation and Polynesian sculpture”.

Just how the panels left the country is unknown, but the next stop in their journey was New York, followed by London, and finally after protracted international court battles, New Zealand.

“So it’s a blessing. And it’s healing [to have them returned],” Waru said.