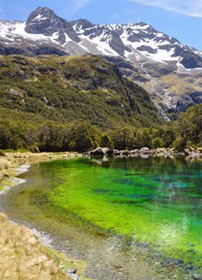 Scientists at the National Institute of Water and Atmospheric Research (NIWA) say that Blue Lake in Nelson Lakes National Park might be the clearest freshwater body in the world. The NIWA scientists said the “extreme visual clarity” of Blue Lake was “perhaps only exceeded worldwide by certain ocean waters” such as those in the southeastern Pacific near Easter Island. Over six visits they found that horizontal visibility usually ranged from 70 to 80m. Aquatic optics specialist Dr Rob Davies-Colley said: “Blue Lake is a close approach to optically pure water.” Most divers considered a visual range, as in very clear seawater, of at least 40m to be “outstanding.”