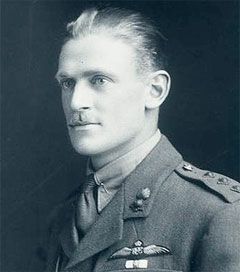 One Summer This Fearless Man Drove off the Luftwaffe

Keith Park was one of the great heroes of World War II, yet years later, when Peter Robb came across the laconic New Zealander, his contributions had still to be truly recognised. Robb recalls a summer in the Hauraki Gulf when he first encountered “this reserved and amiable man.”

“One afternoon, a sleek modern yacht dropped anchor below the cottage,” Robb writes. “Through binoculars, [Robb’s family] watched three elderly men in shorts furl the sails and lower themselves into a dinghy and row toward the beach.

“The yacht had sailed from Auckland, and [of the three, the tallest] man had grown up in that city. Keith Park was a geologist’s son, born in a town on the peninsula across the water from our bay.

“He was 22 when World War I started in Europe. By the war’s end [as a reconnaissance pilot in the Royal Flying Corps] he had shot down between a dozen and 20 German aeroplanes. He was loved by his men for his scruples, his expertise, his daring.”

And then came World War II.

“By late 1939 [Park] was in operational charge of the air defence of south-eastern England, that crucial part of Britain closest to continental Europe with London at its centre.

“Over the morning and afternoon of 15 September …” the Luftwaffe launched its biggest daylight raid on London.

“[Winston] Churchill watched Park making his moves to intercept the Germans, and later wrote that ‘all his arrangements … had been brought to the highest perfection’. At the time, he shared Park’s anxiety. ‘What other reserves have we?’ Churchill asked as wave after wave of German planes was sighted. ‘There are none,’ Park said.

“The Luftwaffe was driven off.

“Late in the piece, and mostly well after [Park’s] death in 1975, some came to see this physically fearless and laconically elegant charmer as the man who in that summer of 1940 saved the West when all was nearly lost.”