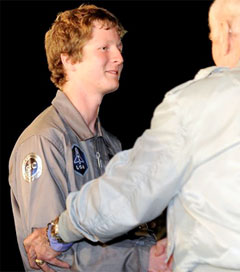 Fagg recently returned from his trip to a space academy camp in Florida after bagging the contest prize for the chance to take a commercial flight to space.

The plane for the commercial space flight is currently under construction and is scheduled to launch in 2014.

LYNX chose Fagg as one of the elite few in the world to fly in sub-orbital space. Out of the two New Zealand finalists, he emerged the victor after completing aptitude tests, various physical challenges and g-force training to take the mission of a lifetime next year.

According to Aldrin, space travel is the “next frontier in human experience.” He said he is excited for LYNX in giving young people the chance to experience being in space. The contest was a promotion for LYNX’s new fragrance, LYNX Apollo.