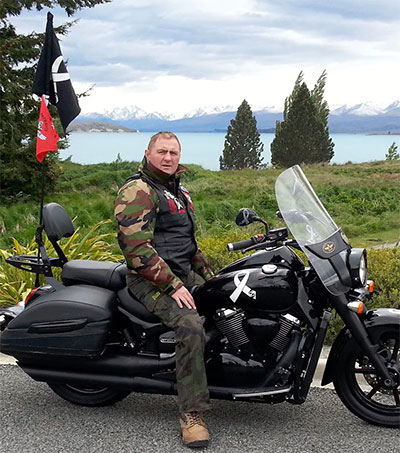 On the Hunt for Illegal Gold Miners

Prospecting for gold in the South Island is growing in popularity by the year, but amateurs looking for a quick fortune can damage the environment, according to Guardian correspondent Eleanor Ainge Roy.

When travelling up the glacial rivers that thread through parts of New Zealand’s rugged South Island Jackie Adams often uses his 1500CC motorbike to move quickly over the shingle beds.

“No-one expects someone from the government to cruise up a river on a motorbike,” Adams said.

It is a job this burly Irishmen who served in Bosnia during the war never imagined he’d be doing – especially alone in the remote ‘wild west’ of the south island, where the summer season of illegal gold-mining is just beginning to heat up.

“A lot of these cowboys, they think that gold just jumps into their hands,” said Adams, who also worked as a police detective in New Zealand, heading the CIB unit on the west coast.

“But they have no real knowledge or feel for mining and they are giving the fourth and fifth generation miners on the coast a bad-name.”

With the price of gold recently fetching nearly $1800 an ounce, Adams has been brought in by New Zealand Petroleum and Minerals (NZPM) to investigate the black market trade; mostly conducted by opportunists who sneak onto private farm land and national parks without permits to fossick for gold.

The modern-day gold rush is particularly evident on the coast, with the region’s mining history and crumpling traditional employment paths attracting prospectors from around the country – and the world.

According to the latest figures from NZPM gold production is at its highest level since 2009; increasing from 583kg in 2014, to 750kg last year; a leap of nearly 30 per cent.

Adams says descendants of the original west-coast miners are quickly getting fed-up with unskilled opportunists galloping into the industry, and trampling up their backyard with heavy-handed operations, which are damaging to their reputation and the environment.