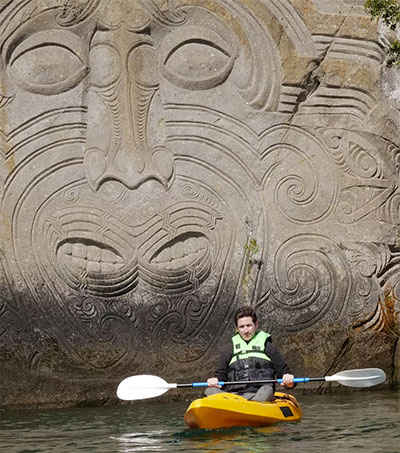 In Oceans Apart, Fox examines artworks that capture the spirit of encounters between the indigenous people of New Zealand and Captain Cook, and how they adapted to outside influences.

“The 19th-century Anglican missionaries won’t have been too keen, but its Māori creator wouldn’t have cared. The Māori were, points out Fox, attached to their culture and resistant to invaders. ‘The Māori didn’t see it as a choice between one thing and the other. They simply took the Christian ideas they liked and incorporated them into their cultural traditions.’

“The theme of this documentary was not domination or colonisation, but ‘encounter’ between the indigenous population and the incomers, and Fox is fascinated with the art and objects that came out of this,” Saner writes. “A patu – a club-type weapon – was recreated in brass back in England by natural scientist Joseph Banks, who was aboard Captain Cook’s voyage to New Zealand; he hoped to take them back to England to trade or offer as gifts to powerful people. A double-barrelled shotgun was sold to a Māori warrior, who had its walnut stock adorned with intricate carvings. ‘A fascinating example of hybrid culture,’ Fox says, going on to briefly mention the ensuing arms race between tribes, in which 40,000 Māori would lose their lives.

“Although Fox is enthralled by the aesthetic possibilities of cultural cross-pollination, the overall effect was to downplay the destruction wreaked by the invaders. Cook’s encounters ‘were destructive, without doubt’, Fox acknowledges at the end, ‘but they were also creative. Because when these different societies, once oceans apart, were thrown together, they produced a kind of artistic alchemy, and that story, one of both conflict and collaboration, has shaped the global imagination.’ But I would have liked to see more than the few photographs of Māori subjugation included here and the analysis of a portrait – painted by a white New Zealander – of an elderly Māori chief, ‘filled with symbols of downfall’, looking dejected in a crumbling meeting house.

“There is due reverence for present-day artists, such as Matahi Whakataka Brightwell, making a beautifully carved war canoe using traditional methods. Today, says Fox, Māori culture is an integral part of New Zealand’s national identity. This documentary paid tribute to that determination.”