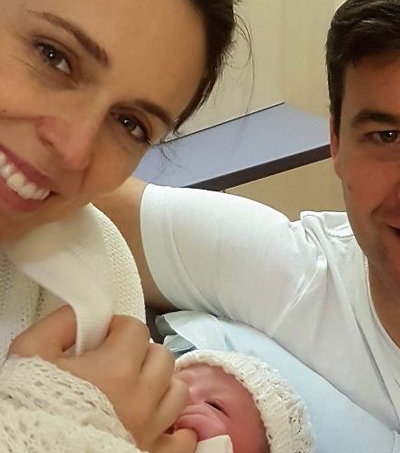 “Prime Minister Jacinda Ardern of New Zealand gave birth to her first child, a girl, on Thursday, making her the first world leader in almost three decades to give birth while in office,” writes Charlotte Graham-McLay in an article for The New York Times.

“Ardern, 37, whose youth and surprise rise to power have made her a global celebrity, delivered her baby at the country’s largest public hospital, in Auckland.”

“Welcome to our village wee one,” Ardern posted on Instagram. “Feeling very lucky to have a healthy baby girl that arrived at 4.45pm weighing 3.31kg (7.3lb). Thank you so much for your best wishes and your kindness.”

Ardern “will take six weeks of parental leave before returning to work, at which point her partner Clarke Gayford will become a stay-at-home parent,” reports the article. In her absence Deputy Prime Minister Winston Peters will act as prime minister.

She announced her pregnancy in January, “just three months after a stunning upset victory that propelled her to the top of the center-left Labour Party”. Her announcement “prompted a national conversation about working mothers, and an international reckoning about the rarity of pregnant women in the world’s corridors of power.”

“The last leader to deliver a baby while in office was the late Benazir Bhutto, then prime minister of Pakistan, who gave birth to her second child”, a daughter named Bakhtawar Bhutto Zardari, in 1990.

“In the 28 years since Ms. Zardari’s birth, several women earned their way into their country’s executive mansions and offices, but none spent time in the delivery room while in power,” according to the article.

Congratulations poured in from overseas as well as from New Zealanders, “some of whom said they were proud of what they saw as a symbolically important moment.”

“This is a sign of our maturity as a country and its acceptance that combining career and family is a choice which women are free to make,” said Helen Clark, one of two other women who have been New Zealand’s prime minister.

“In a world where there are still glass ceilings to be smashed and where many countries continue to have laws, policies, and practices that discriminate against women, the message from New Zealand is one of hope – that women can break through all barriers and do it in their own way as Ardern has done,” said Clark.