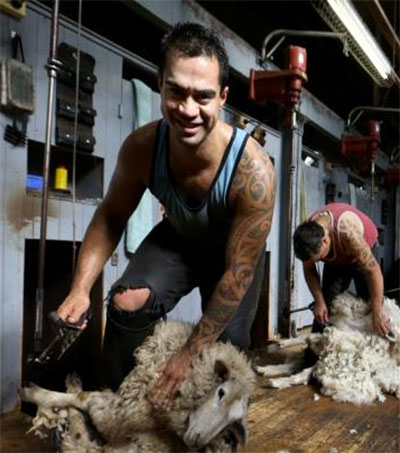 Most of the shearing team bent over the softly glowing timber board of the historic Terrinallum woolshed in Victoria’s western district have New Zealand accents, sport tribal tattoos and are of Maori heritage, including 280-sheep-a-day shearer Lee Brown and his half-brother Kepa. “You get all sorts working in the sheds, but 60-70 per cent of them are now Kiwis,” local Hamilton shearing contractor, gun shearer and former New Zealander Tony Cook says.

“I’m running four teams in different local sheds at the moment and we couldn’t do without the New Zealanders: I’m not saying the Australians aren’t any good but the only way we can keep the workforce up is with the Kiwi shearers who live here permanently or come … for the season.”

With 10,000 sheep to shear each year on the grand, sprawling property near Mortlake, finding a team of eight skilled and calm shearers and wool workers for the large woolshed, who will care for the sheep as well as remove their wool, is always a problem.

“We’d be in real trouble without the Kiwis,” says Gubbins, in open admiration of their skills.

Even the shrinking of Australia’s once-great wool industry in the face of prolonged low wool prices and falling world demand — only 72 million sheep will be shorn this year nationally compared with 180 million 25 years ago — has not eased the shortage.

There are now just 3200 professional shearers, many older than 40, left in Australia, according to the 2011 census, with an estim­ated 1200 New Zealand shearers adding to the tally. Before the 1989 wool crash there were 15,000 working shearers.

Manning the broom and throwing the fleeces is Kura Ropi­tini, who came to Hamilton from Hawkes Bay in New Zealand’s northeast 17 years ago and never left. “I love it here; there’s now a real community of Kiwis living in Hamilton and working the sheds … it’s home now.”