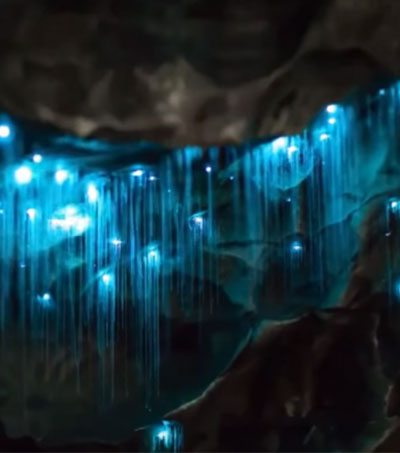 NZ Cave Has Beautiful Phenomenon That Doesn’t Exist Anywhere Else

“Deep underground in New Zealand’s North Island, a winding underground universe of limestone caves glow with a magical blue-green light. While it might seem like pure fantasy, these caves are very real. Their dark interior is brought to life by twinkling colonies of glow worms, or arachnocampa luminosa,” writes Erin Brodwin for the Business Insider.

“The glowworms are found only in New Zealand and eastern Australia,” writes Brodwin. Their glowing light helps them to attract other insects – their food.

“Many overserves have described the experience of visiting the glowworms at night as similar to being under the stars on a clear night,” as reported in the article.

The small insects can switch off their bioluminescence and “have been known to temporarily go dark, typically for as long as 15 minutes at a time,” writes Brodwin.

Glowworms often stick to the same geological area due to the fact that they don’t fly well.