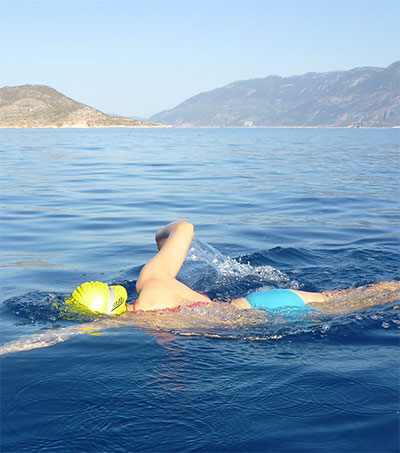 New Zealander Nina Hall, who is a post-doctoral fellow at the Hertie School of Governance in Berlin, recently swam from Turkey to Greece in solidarity with the refugees who are making the dangerous journey across the Mediterranean into Europe.

Hall tells her story in the Guardian.

“I crossed from Kaş, a Turkish resort town where European tourists flock in the summer, into Greek waters near Kastellorizo, a Greek island 5km kilometres off the coast of Turkey. The crossing is near where many refugees have crossed the Mediterranean in recent months.

“So why did I do this swim? I was motivated, first, by a deep concern that thousands of people are drowning off the coast of Italy and Libya, being tear-gassed in Macedonia, blocked by razor wire on the Hungarian border. I am concerned that many European governments are responding with force to people who have risked everything for the sake of survival.

“I am also driven by my own research on the evolution of global refugee and migration governance. In times of great need for Europe, the rest of the world was willing to take European refugees and migrants.

“I am driven by a hope that those of us living in Europe will view refugees as beneficial to society.

“My swim from Turkey to Greece was only a few kilometres long, and nothing compared to the distance, uncertainties and challenges that many refugees face on their way to Europe. European leaders should realise that refugees are far from being just a burden to taxpayers, but bring great benefits. European governments also have a legal and moral responsibility to assist refugees. They are legally obliged to do so by the Refugee Convention and by the historical record. Europe and its people once benefitted enormously from others’ openness – now it’s time European leaders stopped using force, opened up Europe’s borders, and all of us living in Europe welcomed refugees.”

Her forthcoming book is called How International Refugee, Migration and Development Organizations Respond to Climate Change.