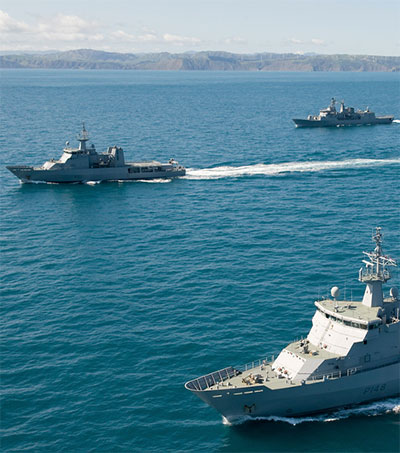 “Last [month] New Zealand Defence Minister Ron Mark met with his Canadian counterpart, Harjit Sajjin, in Ottawa. However, on his way to the Canadian capital Mark made a stopover in Victoria, British Columbia, on Canada’s Pacific coast. At the Victoria Shipyard two of the Royal New Zealand Navy (RNZN) Anzac-class frigates – the HMNZS Te Mana and the HMNZS Te Kahn – are undergoing combat system upgrades and Mark was there to inspect their progress. This is notable as the two RNZN vessels are the first foreign warships to be modernised in Canada since World War II, making the contract not just an important bilateral development between the two countries, but also an important component of Canada’s involvement in Indo-Pacific security,” Wyeth writes for the magazine.

“In September last year I wrote an article for the Lowy Interpreter that illustrated the forces that are beginning to shift Canada from an Atlantic-facing country to a Pacific-facing one,” he writes. “This will remain a long-term process, as the majority of the country’s population –and their cultural affinities – are still weighted toward its Atlantic coast, and of course its prominent southern neighbour. However, Ottawa’s cooperation with New Zealand in the upgrading of the RNZN frigates is a prominent symbol of Ottawa’s intent to enhance its security capabilities on its Pacific coast, a recognition of the global shift in power toward the Indo-Pacific, and of Canada’s need to involve itself in that shift.

“For a state such as New Zealand that lacks significant hard power, there is a reliance on its reputation in order to project influence. Trust becomes its most important asset, and with this trust comes an ability to be creative, to seek out norms that it wishes to shift to its advantage and find partners willing to see the mutual benefit in this shift.

“Awarding Canada a contract to upgrade the combat systems on two of its frigates (that were initially built in Australia) may seem like a small initiative, but it has the potential to enhance the ability for Canada to increase its capabilities in defence hardware and as a more active security provider. And for Wellington’s purposes, assist in Ottawa’s pivot toward its Pacific coast, and Indo-Pacific engagement.”